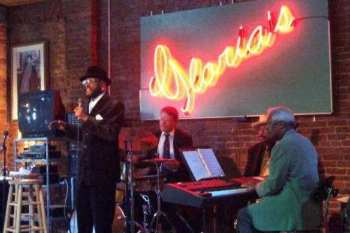 I just wanted to check in with a quick report on the Billy Paul show over at Gloria’s Seafood in the Fairmount section of Philly on Sunday afternoon 9/16/2001.
The SOLD OUT show was excellent
I would estimate the crowd to be around 200

I was there for the first set, which began at 4pm
The crowd was “Old School Philadelphia”, not unlike the crowd that I was a part of last November at Showmans Lounge in Harlem for the Jack McDuff benefit show, just shortly before his passing.
…………….BRO JACK MCDUFF
BRO JACK MCDUFF

This was the “1950’s pinky ring wearing folks” that reminded me of friends of my parents. These are the REAL “old school people”, who have not only seen it ALL, they have also “DONE IT ALL”

Billy performed a wonderful 1 hour “classic jazz” set complete with scatting and vocal gymnastics, with a few of his R&B hits from the 70’s mixed in.
Those of you who think of him strictly as a “pop singer” are going to be pleasantly surprised

Anyhow, here is a song by song review.

· · WHERE ARE YOU BILLY BOY
Billy strolls out onstage in a BLCK VELVET SUIT AND HAT. The “brim” is just that, it’s the type of “brim” that my grandfather used to wear, that 1950’s style SERIOUS “brim”. The song is autobiographical and seems to be fitting this crowd who is also “old school Philadelphia”. Billy is genuinely happy to be on the stage and singing to “his people”, PHILLY STYLE! Billy mentions to the audience “I started out as singing jazz, most people don’t know that”. He also dispenses with his jacket

· · BILLY’S BACK HOME
Another autobiographical song. If you have a copy of Billy’s new LIVE CD called “LIVE WORLD TOUR” (which you can order from his website at:BILLY PAUL’S WEBSITE ) then you are quite familiar with it. Billy continues in the same groove, also acknowledging folks in the audience that he knows as well as a few relatives.. Billy cooks right along with the trio that is backing him up. The inclusion of these two songs right at the beginning of the set seem to be designed to establish Bill’s comfort level with the audience. The audience claps on each note that Billy sings. He is singing jazz and you can tell that both Billy and the audience are in a groove together. Once that comfort level is established, it is clear that we are all in for a treat.

· · JUST IN TIME
Billy starts the song out by saying that he is hot, and starts rolling up his sleeves. A woman blurts out..”take off the shirt”, Billy laughs and proceeds to roll up his sleeves and then, Billy starts a scattin and the audience starts to lose it!

· · OLD FOLKS
Billy announces: This next song is dedicated to Mr. Eddie Green, who was the arranger of Billy’s 1970’s hit song “This Is My Life” and who also played on the 1972 Grammy winner, “Me and Mrs Jones”. I thought that was a nice tribute. Here you could visually see Billy “FEELIN IT” as his body “contorts” in a different direction with each note that he sings

· · SLEEPING BEE
Just as all good jazz singers do, Billy Paul turns his voice into an instrument and literally becomes “just another member of the band”! He sings “high” and “low” based on the “swing” of the other instruments in the band. He improvises at the same time as he follows

· · EBONY WOMAN
Billy starts this song out for a moment of silence for the victims of the events of 9/11/2001 and adds “we got to pray together and stay together, no matter what goes down”. He also mentions the fat that he will be leaving in a few days to do a series of concerts in Brazil and then on to do more shows in Paris. Then he dedicates this beautiful love song which you all might remember from his 1970’s LP entitled “Ebony Woman” to his wife Blanche (who happened to be sitting right next to me). The song itself is an anthem to ALL Black women. Billy sings the HELL out of it!

· · THANKS FOR SAVING MY LIFE
Billy’s “Uncle Woody” happens to be sitting in the audience and so he dedicates this song to him. The song as many of you will recall is a mid tempo tune, so “Uncle Woody” gets up and starts dancing near his table. Billy reacts by beginning to take a stroll thru the audience first over to “Uncle Woody” and then later moving with ease throughout the rest of the audience, seemingly “thanking them as well”! 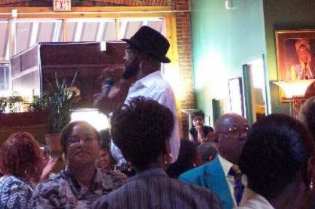 · · LOVE BUDDIES
There is NO WAY I could possibly be objective about this song. At the very beginning of the song Billy starts talking about Soul-Patrol, giving the members BIG PROPS for providing a wealth of information about the past present and future of Black music/culture and preserving it for future generations. He also spoke of it in terms of the “internet family” that has also grown up around it. I suppose the title of the song says it all? Then Billy asks me to stand up and take a bow for the audience and they begin to applaud me! It was a surreal moment for me on a personal level, and one that I will always cherish.

· · APRIL IN PARIS/I LOVE PARIS
Singing STANDARDS is a true test for anyone who calls themselves a “jazz singer”. Billy takes these two standards and forms a beautiful medley out of them. His interpretation is soulful and emotional. Personally I’d like to see him do an entire album of this type of music

· · ME AND MRS JONES
Billy starts out this song by saying that people ask me all of the time, if I’m ever going to do a sequel to Mrs Jones and I have told them that Mrs. Jones Stands Alone”. One of the things that must be truly frustrating for any artist is to be known as a “one hit wonder”. It must be especially frustrating when the artist when you have had a career that actually has consumed over 40 YEARS of time and you have worked with everyone from Gamble and Huff, the whole Philadelphia International crew (Harold Melvin and the Blue Notes, O’Jays, Intruders, etc), the “old school” Philadelphia Jazz Tradition (John Coltrane, Lee Morgan, Sun Ra,etc), DOO WOP (the Flamingos) and more. How frustrating must it be when you have had such a full and diverse career, to not only be pigeonholed as an “R&B singer”, but even worse to be know to most of the public as a “one hit wonder””? Surely there must be a “love/hate” relationship with that one song?
Instead, he sings the HELL out of the song!
He moves about the audience with ease, selecting women in the audience to sing certain parts to individually. With each successive lady that Billy sings to, that lady SWOONS and soon he’s got the entire audience of females SWOONING along!
The concert ends on a high note with Billy thanking everyone for coming out!

Billy Paul surely deserves a better treatment in history than he has been given to this point in his career. At this point in time he wants to be known as a “jazz singer” and surely he’s got the talent to do exactly that.
If you get a chance to go and see him live, please do so and after the show, you will be more than pleased!

For those of you who are unable to catch Billy perform live, I would highly recommend picking up on his “LIVE WORLD TOUR CD”, which is available from his website at the following link:
BILLY PAUL’S WEBSITE

Feel free to drop Billy an email directly from the site and when you do, be sure to tell him that I said hello!