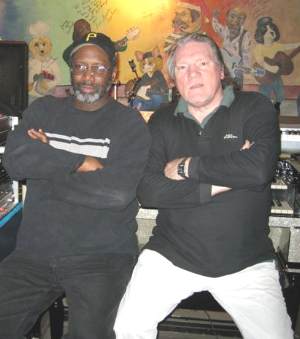 It was a few weeks ago today that I saw Brian Auger perform at Moondog’s here in Pittsburgh. The steam from the smoke caused at the club that night is finally staring to go away, thanks to some rain in the area.

I don’t know how many of you have seen Brian and the Oblivion Express recently but don’t pass up the chance to see them. The whole show is a journey through “Great Black Music”. How that is possible many of you may ask for this White guy do do this?

The answer is plain and simple. Brian Auger is one of the giants of Jazz-Fusion. Like Joe Zawinul, he has the soul of a Black Man and is funkier than a mosquitoes tweeter.

Some of you have been following his music for over 30 years on the US recording scene. For over forty years, Brian Auger has been a musician’s musician. Jazz pianist, bandleader, session man, Hammond B3 innovator, and key player in the rise of jazz/rock fusion, Brian has done it all and then some.

An incredible musician with one of the most varied careers in music, he has incorporated jazz, early British pop, R&B, soul and rock into an incredible catalog that has won him legions of fans all over the world. Brian has also played with the Yardbirds, Long John Baldry, Eric Burdon and founded the Trinity with Julie Driscoll before creating the Oblivion Express. Aside from playing the British and American pop tunes of the day, Brian’s ears lit up when he started listening to his older brother’s record collection with names like Count Basie and Duke Ellington. Auger’s brother also gave him and old radio, and he was able to hear American jazz played over Armed Forces radio. Brian could see patterns in jazz compositions, which helped him later as a composer. Auger became fascinated with the various jazz piano men that were making an impact on jazz He admired Oscar Petersen, Hampton Hawes, Victor Feldman, Red Garland, as well as McCoy Tyner and Herbie Hancock. During the show you will hear Eddie Harris, Les McCann, Wes Mongomery, John Coltrane, Marvin Gaye and James Brown.

That night at the club, me and my good friend and original “soul-patroller” Aaron Clausell who went to school with Bob Davis also, grooved to many of the jams we listened to as students some 35 years ago. Wow…it was like a trip back in time and seemed like we were sitting in the dorm listening to the record player and having “refreshments”. Aaron was grinning from ear to ear as we listened to the new edition of the band reworking some classic tunes and turning us on to new ones.

We were delighted to check out Derek Frank on bass, Savannah Grace Auger ( the ah “quiet one”) on vocals, Karma Auger on drums, and Brian Auger “the godfather of acid jazz” on Hammond B-3 and keyboards.

The joint was jumpin’ and there was definitely smoke coming from the bandstand.

Like I said…go check them out. Happiness is sure to be just around the bend.