It is with a great deal of pleasure that we are taking this oppurtunity to introduce you to….Kyle Jason. 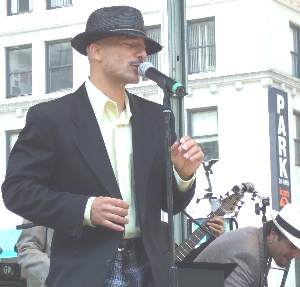 Returning to the scene of the crime….Both for myself and for Kyle Jason…

City Hall Park in Lower Manhattan is a historic location…

Obviously it is right in front of New York’s City Hall. It’s also right on the edge of the NYC Financial District, not far from Chambers Street (home of the NYC Court System). On nearby John & Nassau streets there are great places to eat of every type and every price range. It’s also a mecca for those of us who are in a constant search for high quality music because located right across the street is music retailing & electronics giant J&R Music (also one of the sponsors of the concert) and of course the former location of the now closed Bondys, a great outlet for independent Black music.

Music is always a perfect reflection of the culture that it is derived from. Ironically back in the 1970’s City Hall Park (the seat of NYC government) was known far and wide as the easiest place in the city to score drugs on the street. And following suit there was always great (LIVE/FREE) music in the park of all genres! Back in the 1970’s City Hall Park was a place that I used to spend a whole lot of time in as a young man, because all of the major Funk & Jazz artists of the day, did FREE shows there. However that all came to an abrupt end when Mayor Ghouliani cleaned up the activity in City Hall Park. The street dealers went elsewhere and the free concerts migrated over to the Great Plaza of the nearby World Trade Center.

All of the above was on my mind as I rode the PATH subway train thru the tunnel from Jersey City to the World Trade Center train station. As the train emerged from the darkness of the tunnel to the open air of the station, I shed a tear as I always do when I see the huge hole in the ground where the mighty twin towers once stood. Although it’s six years later, that huge hole in the ground stands today as a testament of how the most exciting city on the face of the earth had it’s heart ripped out. It’s much more than a hole in the ground. It’s an “open sore”, that even after it gets filled in with whatever they end up filling it in with will still always be a graveyard in my mind. And not just a graveyard for the people who died on 9/11, but also for a certain “vibe” that defined what NYC was and can never be again…

I see young people, old people, black people, white people. I see hippies, I see skinheads, I see Hasidic Jews, I see Rasta dudes, I see businessmen, I see kids eating hot dogs and mothers feeding their babies. I see the human mosaic that is NYC in front of me and on this beautiful Saturday afternoon I also know that as good as all of those folks no doubt are feeling that they are gonna be feeling a whole lot better soon.

That is because they will become elevated with the LIVE FUNK of Mr. Kyle Jason.

A few of you might recall that I reviewed Kyle Jason’s latest release entitled “Revolution Of The Cool”. As a part of that review I said: “Kyle Jason is a throwback to the future of soul.” I also said that “You see a long time ago the powers that be removed the designation called FUNK from the formats of radio stations and the bins of record stores. This was done in order to remove the concept of FUNK from our minds in order to restrict and control our thinking. It is however a “format” that fits in quite nicely here on Soul-Patrol so I think that you may hear some of this music here…”

So I knew that the mosaic of people who had gathered inside of City Hall Park on that day were in for a “spiritual experience”.

Those titles are meaningless to you, because you haven’t heard the album.
Revolution Of The Cool: www.kylejason.com

But if you had been just outside of the park this past Saturday afternoon, simply listening to the music and not inside watching, you would have sworn that James Brown, AWB & Tower of Power were inside of City Hall Park jamming. And for me that groove makes me think of the 1970’s. However on this day it isn’t 1977, it’s 2007 and the cast of characters is far different. Probably 40 percent of the people inside of the park that day weren’t even alive in 1977.

As I mentioned at the top, Kyle Jason is also a native New Yorker who now lives elsewhere (North Carolina) and I suspect that much like myself “returning to the scene of the crime” (City Hall Park) has got to be something of a catharsis. He turned in a magical performance for the mosaic of humanity inside of the park where the missing twin towers still casts a mighty shadow.

Moving and grooving, backed up by his AWB/Tower of Power inspired band, dressed to kill in 1950’s style fedoras and suits he was pure James Brown onstage, electrifying and inspiring the audience to get involved. When he danced people to young to remember what LIVE FUNK sounded like danced. When he grunted, people who are too young to have ever seen James Brown grunt LIVE, were moved to grunt. And with a single 45 min performance he restored to the heart of NYC the “vibe” that had previously existed there, prior to 9/11/2001 if only for a little while. He successfully elevated the groove for the people and as a result he raised the stakes for himself as an artist.

I have now reviewed Kyle Jason’s album and seen him deliver the REAL THING live on the streets of NYC. That means as I continue to follow his progress he needs to continue to bring his “A Game” to the proceedings. You will be able to follow it as well since BET-J was on the scene to film the show, portions of which am told will air on cable TV at some point.

We need Kyle Jason’s version of THE REAL THING far more than he even knows…..

Currently the world of independent soul music is plagued by mediocrity and a lack of truly compelling music. The best analogy I can give you is that much of Indy Soul in 2007 is like driving a 6 cylinder Oldsmobile, that needs a tune up. Already “underpowered” to begin with and even when you “floor the accelerator”, it feels more like a “lawnmower engine”.

Kyle Jason’s music feels like you are driving an 8 cylinder 440 cubic centimeter “duce & a quarter” (Buick Electra 225 for the uninitiated). If you “floor the accelerator”, on a “duce & a quarter”, you had better damn well know what you are doing because it is not a toy….

After the show I went backstage & to congratulate Kyle for doing such a great show and apologizing because I had to split.

I left the park and walked down the street with a little bit of extra “glide in my stride & dip in my hip” armed with the knowledge that for myself and all others who had seen the show, the world was now a better place because of the FUNK MUSIC we had just heard. As soon as I got to Church Street I became determined not to let the sight of that “big hole in the ground, where the twin towers once stood” destroy my groove. So I turned my head away and ran down the steps inside of the World Trade Center PATH station. There was a train headed back to New Jersey waiting on the platform, I entered and closed my eyes until I could feel the train pull away from the station and back into the tunnel, where the “hole in the ground” couldn’t be seen.

The “funk groove” that Kyle Jason had given me was intact. I was glad to have snuck into NYC albeit briefly to experience the show because it put me into the proper frame of mind, body and spirit to experience what would later prove to be a mind blowing exhibition of Afrocentric unity and spirituality later on that day at the one and only Dell East Amphitheater in Philadelphia, oddly enough to be provided by a white woman named Teena Marie….

Kyle Jason – “Revolution Of The Cool”

The definition above is one of many imprecise definitions that I have developed over the years in my lifetime quest to try and gain a deeper understanding of just what the “bastard genre” of FUNK music is.

It is quite interesting to me that Kyle Jason’s “Revolution Of The Cool” is the first CD review of the year for Soul-Patrol. Each year I get at least one album that is almost a perfect representation of what Funk music could have/should have evolved into had it not been for the election of Ronald Reagan in 1980. Artists like Buckshot LaFounque, Victor Wooten, Don Byron, King Britt/Sylk 130, Nadir, Sonny Boy, D’Angelo and a few others over the course of the past 10 years or so have seemingly nailed down for me various aspects of just what that evolution might have sounded like.

None of this is to say that Kyle Jason doesn’t have his own sound because he does. Kyle Jason is a throwback to the future of ‘soul.’ An outstanding artist with a massive, diverse catalog, Kyle has recorded “Revolution of the Cool” with organic sounds from his band The Soul Power Movement. Kyle Jason’s music is not unlike the music of artists like Buckshot LaFounque, Victor Wooten, Don Byron, King Britt/Sylk 130, Nadir, Sonny Boy, D’Angelo and a few others. It’s innovative yet at the same time reminds of things that we thought we forgot. And like those other artists, “Revolution Of The Cool” is an album for which there is literally no current commercial radio format. You see a long time ago the powers that be removed the designation called FUNK from the formats of radio stations and the bins of record stores. This was done in order to remove the concept of FUNK from our minds in order to restrict and control our thinking. It is however a “format” that fits in quite nicely here on Soul-Patrol so I think that you may hear some of this music here…

Here is another one of those perhaps imprecise definitions for FUNK:

FUNK = “The essence of ALL Black music…”
And while that might not be perfect description of FUNK music, I think it works for trying to describe what Kyle Jason does. And it sure is an awfully nice way to start off the New Year.