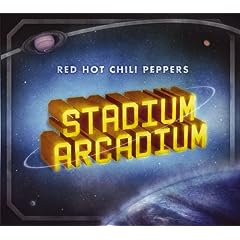 Didn’t know how to approach this at all. Then I went to the RHCP official site and read John Frusciante’s notes on the album and realized I would just write how I felt after I had done what I always do with my boys’ music – just let myself fall into it..

The album is "Stadium Arcadium" and I’ve been waiting not so patiently (but oh so wetly) for it to come out. It’s a double cd with 14 tracks on each disk. Disk 1 is called "Jupiter", disk 2 is "Mars". As a die hard RHCP fan I thought I’d share this with you.

Disk 1 Jupiter – I listened to this exclusively for a week, I was lost in it. This is fast becoming my favorite album of theirs – and I have ’em all. Why is it badd to me? It’s full of love songs

Dani California
This is the first commercial release for the album. My first reaction was "it’s definitely THEM". Makes me smile and I adore the video, even put it on my blog. Love Chas’ drums. Best line "She never knew that/There was anything more than poor".

Snow (Hey Oh)
This is how I like to hear Anthony sing – gentle. Getsmeweteverytime. Best line "When it’s killing me/When will I really see/All that I need to look inside". This is really a grown up song of awareness.."The more I see the less I know" – ain’t that the truth?

Charlie
This song is what I call one of their "fun" type songs. Slightly discordant with a subtle almost jungle beat underneath. Really nice give and take between Flea on bass and John on guitar. Nice background riffs from John, Flea is thumbin that bass to set the beat.

Stadium Arcadium
I can’t decide if this is my favorite on this cd or not, it’s a real hard call. The lyrics are what get to me the most.. "I never thought I’d be in bloom/But this is where I start". It also has a very haunting mood (another of their trademarks that make them my only favorite band). Dunno why this one just tugs at my heart so.

Hump De Bump
I was SO prepared for some serious funk on this one, it starts out very funky but eases off. Such potential for booty-shakin’ stuff, but you can still get your funk on and bop in your seat. (And you know what I heard while listening to this? Strains of Nadir’s "Leave it Alone".) More than anything it takes me back to the dead center of "Blood Sugar Sex Magik".

She’s Only 18
Ok, this song I’m still trying to get a handle on. I’m feelin the music but not the message. I sorta feel a spread between 70’s rock and the stuff some of the newer groups are playing. A generational message in the song? Maybe. Or maybe I’m reading more to it than there is.

Torture Me
So this is one tied up as my favorite. It’s a freakin hurricane. Starts off with Flea thumbin the bass. And again Anthony starts with (another getmewet) sound when he kicks in. They slam you throughout the song, driving the emotions then throw in a peaceful oasis which reflects the eye (of the hurricane) of sanity then back to pure adrenaline. Throw in the brass and you just wanna bang your head or jump in a mosh pit. Love it.

Especially in Michigan
Interestingly enough, this song could be a link between the albums "Californication" and "By the Way". Now from what their official site says, they wrote these songs in a block, but I feel leftovers from previous albums. That’s not a bad thing by any means – it’s like an evolution or completion of what came before. Closure if you will.

Warlocks
Another (what people would like to say) funky track. Ok, RHCP funky that is. Flea amazes me sometimes in the way he just carries you along with his bass. He defines the feeling on this one and it’s uh, easy funk – not stank – but steady, ya know? Best lines "Warlocks in wonderland/I’ve gotta..Rockapotomus in my hand/with..Happy ending that’s made of sand/With a little bit of lovin’ is all I can".

C’mon Girl
Yeah I know, enough with the comparisons already – but it’s what I hear. I hear "Get On Top" in this. Granted the song is softer, far from driving except for the chorus, that’s where it drives you. I go for the lyrics in this one "And if you let it germinate/I know it will be worth the wait/Disputed by the news that it was you/Who tried to instigate, hey".

Wet Sand
Another of the tied for favorite on this cd – and truth be told, right now really the frontrunner. I can listen to this one song all day. The closing lyrics "You don’t form in the wet sand/You don’t form at all/You don’t form in the wet sand/I do" (for me) are way deep and say a helluva lot. It’s a love-lost/what coulda been song pure and simple. "My love affair with everywhere/Was innocent why do you care/Someone start the car/Time to go..you’re the best I know".

Hey
Oh-so-jazz inspired! I can see them up on a small stage in a cramped, smoky jazz club playing this. Chad Smith on drums makes this song for me. John F has a nice solo (he’s not Jimi but he’s in the top 10). Anthony’s getsmeweteverytime voice on this one too. The whole feel of the song is good. The lyrics are the shit "You used to be so warm and affectionate/All the little things I used to hear my fairy say/But now you’re quick to get into your regret/Take a fall and now you got to give it all away". Um, yeah another of the tied for fav on this cd 

Disk 2 Mars – it’s really taken me over a week from the day the album came out to dedicate myself to listening. But it was SO worth the wait!

Desecration Smile
Heavy acoustic guitar, the way I personally like to hear an acoustic guitar played – with energy and passion. (I can almost picture John playing this like Melissa Etheridge performs.) "Desecration is the smile on my face/The love I made is the shape of my space". Hmph, sums me up right about now.

Tell Me Baby
So ok, this one is also a front runner and may be edging out "Wet Sand". Starts out soft and sweet then BAM straight into PURE UNADULTERATED CHILI PEPPER FUNK. I had to replay it 5 times in a row. I had to get up, go to the copier room where no one could see me and dance with my ipod. Damn. The chorus hooks you BAD – "Tell me baby, what’s your story/Where you come from/And where you wanna go this time/Tell me lover, are you lonely/The thing we need is/Never all that hard to find". Whew!
*edit* – yes, this is my ABSOLUTE FAVORITE song on this album, all I want to do is dance, dance, dance

21st Century
I was waiting for their political/cultural commentary, this is it. War, religion and bullshit. And I agree with ’em.

She Looks To Me
Has classic Chili Pepper sounds to it, but what I hear is their version of the younger bands out there. I really like the lyrics, but the music doesn’t talk to me like most of the rest of the album.

Readymade
Ok, I don’t like this song – that was my first reaction, but it grew on me. It’s hard driving rock n’ roll and that’s what hooked me. Removing any doubt anyone may have that my boys ARE a rock band and know how to throw down.

Made You Feel Better
Again with the "sound" of the newer bands. But I like their version of that "sound" on this one. Or maybe since they’ve been around so much longer – the new bands just twisted my boys and this is what it SHOULD sound like? And yes, they ARE the ones that always made me feel better

Animal Bar
I don’t get it. Another attempt at mimicking the newer bands with their own twist. Catchy but not a favorite for me.

So Much I
Um, I really don’t like this song at all. They’re better than this. So out of 28 songs I don’t care for one? Hell I can live with that!

Storm In A Teacup
Ok, I really really did NOT want to like this song either. Didn’t like how it transitioned after the initial rap-type start, didn’t like the bits I heard off and on the first couple times I listened. But (again) it grew on me AFTER I read the lyrics. It’s one of those Chili Pepper songs where they use 2 or more "sounds" in one song.

We Believe
I can’t place what this song reminds me of, but it’s just "ok". The lyrics are there for me but the music doesn’t belie the words as much as I’m used to from them.

Turn It Again
Aside from the lyrics of "Tell Me Baby", I feel the lyrics and get the MESSAGE in this song more than anything. "Sometimes when/I’m lying there all alone/I think of every little nothing/That we could own/To overthrow all of you/Who have overgrown". Interesting from a group that is 40-something like me.

Death Of A Martian
Oh yeah, Chili Pepper lyrics at their best with a beautiful blending of the sound that helps carry the message through. Ends with a (for lack of a better term) spoken speech like an epilogue.