GUEST EDITORIAL: Chuck D – Never have so many been pimped by so few 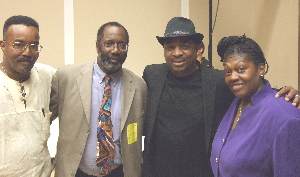 As most of yall know, Soul-Patrol has stood front and center not only against mediocrity in Black music, but also against those who claim that we should be accepting of it. We think that OUR CULTURE is far too important to the future of OUR CHILDREN to be willing to “accept less than the best.” Plain & simple, “that ain’t how we were raised.”

I don’t have much to add to this, except to say; read it and pass it along. Especially to someone who is younger than you. And ask them to pass it along to someone even younger…

[Note: Chuck D wrote this essay as a letter to Chuck “Jigsaw” Creekmur (AllHipHop.com) and Davey D (DaveyD.com). With permission, the message by the Public Enemy leader, has been edited slightly into a scathing editorial about the media, Hip-Hop and the how the culture has been pimped by a mere few.]

I really don’t know what constitutes for “relevant” coverage in HIP-HOP news in America these days, but I really want to give you all a heads up. As you know I’ve been through three passports, 76 countries on the regular in the name of Hip-Hop since 1987 and in 2010, although I’ve never stopped traveling the earth this year, I’ve seen, heard and felt some new things.

As far as RAP and HIP-HOP, it’s like USA Olympic basketball, the world has parity now and have surpassed the USA in ALL of the basic fundamentals of HIP-HOP – TURNTABLISM, BREAKING, GRAFFITI, and now EMCEEING with succinct mission , meaning and skill. Skill-wise rappers spitting three languages, have created super rappers to move the crowd with intensity and passion. The “arrogant” American comes in blackface, but if there was a HIP-HOP or Rap Olympics, I really don’t think the United States would get Gold, Silver or Brass or even ass for that sake.

The 20th year anniversary of FEAR OF A BLACK PLANET has become into a year and a half celebration of eights legs and five continents. All the while, looking at a HIP-HOP Planet across 25 countries while still somewhat supportive of American rap, the rest of the world has surpassed the U.S. in skill, in fundamentals and commitment to their communities. Public Enemy’s mission is to set the path, pave the road for cats to do their thing for a long time as long as they do it right.

Because of the lack of support from local radio, television and community in the United States, the ability for “local” acts to thrive in their own radius has killed the ability to connect and grow into a proper development as a performer, entertainer and artist. Rappers trying to get put on to a national contract hustle from a NEW YORK or LOS ANGELES corporation has caused the art-form to atrophy from the bottom, while never getting signed to a top echelon that really doesn’t exist, but to a very few.

HIP-HOP NEWS spreads like any other mainstream NEWS in America. The garbage that’s unfit to print has now floated on websites and blogs like sh*t. For example a rapper working in the community gets obscured while if that same rapper robbed a gas station he’d get top coverage and be label a “rapper” while getting his upcoming or current music somewhat put on blast, regardless of its quality which of course is subjective like any other art. RAP sites and blogs are mimicking the New York POST.

This is not mere complaint , this is truth and its coming down on Americans like rain without a raincoat with cats screaming how they ain’t wet. This is real. The other night upon finishing groundbreaking concert performances in Johannesburg we followed a special free concert in Soweto. To make a point that our agenda was to “show? and encourage the Hip-Hop community to be comfortable in its mind and skin without chasing valueless Amerikkkan values.

It does the people of the planet little good to hear that an an artist is famous and rich, will wear expensive jewelry straight from the mines, show it off, stay it the hotel, ride in limos, do the VIP with chilled champagne in the clubs, ape and monkey the chicks (meaning not even talking) and keep the dudes away with slave paid bodyguards when real people come close. The mimic of the VIACOM-sanctioned video has run tired, because it shows off, does NOT inspire and it says NOTHING. Here in South Africa PUBLIC ENEMY has done crucial groundbreaking performances. Its the same level of smashing the house that we’ve done this year in Moscow, New York, Paris, London , Chicago and other places this year. This is not news We are not trying to prove any point other than to show that a classic work is timeless and doesn’t have a demographic per se. The Rolling Stones and U2 are NOT measured by mere tracks’ they are measured by the all-around event they present. The art of the performance has left Hip-Hop whereas somebody has led artists to do more performing off the stage than on it. The agenda here is to create artist exchange.

This serves as a call to the infrastructure-less Hip-Hop game in Amerikkka. We know what your hustle is, but what is your work and job here? Faking it until making it runs its course in a recession, which is a depression for Black folks who increasingly are becoming more skill-less as they become jobless.

Since the music has so much power, and image has become everything to the point that it can dictate the direction of a person in their life, it is my mission now to really become a “freedom fighter” and stop this radiation. With Jay-Z and others who, for years would faint their worth, the statement of “with great power comes great responsibility,” is more true. Words are powerful and they can both start wars and bring peace. This cannot be taken lightly. Its important for the words to be body with the community. If not one dime of $250 million doesn’t benefit the people who contribute to it then why does that warrant coverage above the will and effort of many in the music who have done great things.

I turned 50 this year. Everyday I get the question whats up with Hip-Hop today. If nothing was wrong the question wouldn’t be the dominating question I get. I do massive interviews worldwide. I’m covered from varied aspects Hip-Hop, Public Enemy, social issues, musicology in general. So, my interactive world dialogue is deeper and more present than 140 characters.

I am tired of the silence of people that know better. There is nothing worse than a person that knows better and does worse. Or says nothing.

And makes excuses for bulls**t.

You know damn well HIP-HOP in the USA has fell way the f**k off as the American dollar and much of America itself. Held up and dictated by White business lawyers, accountants in New York, and Los Angeles offices. To dictate to a community and not even live or be with the people is offensive. VIACOMs reach into Africa to turn HIP-HOP in to Amerfrica, which is as exploitative as those slave-makers who carried us across on boats. The decisions made in a boardroom in New York City while these cats scurry to their high rises, and suburban mansions from cultural profiteering must stop. And I’m going to do something about it.

My agenda of Hip-Hop around the world is in line with its creators, who followed Black Music. The music had the people’s back. It has never been my personal agenda. Americans arrogantly have no back. Hip-Hop has followed this. I am disturbed by the fact that I tell artists that doing work in their community will get them little or no buzz for their effort, but in the same sense if they robbed or shot someone or did a bid they would get national and sometimes international attention.

So many of your favorite people suck up to the NBA and NFL, because it has order and when you make the game look bad David Stern or Robert Goddell is kicking their asses out . They are the indisputable HWIC, and negroes are in line and silenced. But here in Hip-Hop the dysfunctionality reward makes the money that puts food on many tables.

Its time, because I hear too many excuses. I wont allow what’s in the USA f**k up what I and others worked hard to instill. I drive a ’94 Montero, a ’97 Acura, and have no expensive jewelry. There is nothing on this planet materially that is better than myself. This is what I instill in many doing Hip-Hop that nothing is greater than what is given. These games of people doing anything to get things has seeped into my way so therefore witness some radical virtual things coming from me in protecting the art-form of Hip-Hop.

Chuck D is an emcee, author, producer and civic leader, among other things. He also happens to front a legendary, revolutionary rap group called Public Enemy. Public Enemy is renown for their politically charged lyrics, frenetic production style and penchant for shaking up the power structure.