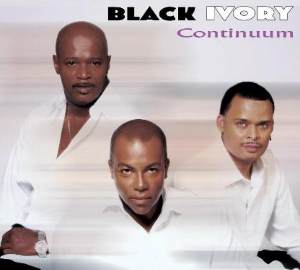 Some 40 years ago (damn! has it been that long?), I added, BLACK IVORY as one of the groups I came to enjoy in style and substance. “I’ll Find Away” is among my all-time favorites of ‘ALL’ of the songs I like to listen to even today. The ‘Industry’ can be cruel to recording artists and thus, cruel to the fans of recording artists. They set their own criteria for what they are willing to support, I suppose, based on a bigger picture. I’m being kind. They kick to the curb what ‘they’ don’t want or think is viable to their business ‘objectives’. We have seen it repeatedly.So BLACK IVORY was yet another casualty of this ‘process’. But NOW….

“CONTINUUM by BLACK IVORY” has come into being. A ‘reunion’ of sorts of the three young men, Stuart Bascombe, Leroy Burgess and Russell Paterson we embraced some 40 years ago. They have come a long way from, “Don’t Turn Around”, but in many ways, this album is reminiscent of the style of vocals and harmony that their followers and fans were drawn to.

TRACK LIST….
Like Fallin’
Lucky Tonight
Don’t Need No Rehab
He Said, She Said
Win At Love
Ghost
Lookin’ For Love
Get Down
Back Home
O Just Wanna Live.

As I am prone to do when ‘The Juice’ asks me to do a review on an album, I stick it in the car for a few days. When I’m ‘impressed’, I take it out of the car and put it in my CD tray in the computer while I ‘go about my domestics’. This is what happened with this album. In part because I always liked Black Ivory, but mostly because I liked the songs and the singing. We don’t get to hear so much ‘group harmony’ as we did back in the day and “I” will always gravitate to that. In the ‘tradition’ that is Black Ivory, there are colorful vocals, applying some ‘studio razzle dazzle’ with overdubs of expanded vocals with counterpoint and fuller harmony structure. It’s ‘easy on the ears’.

It would appear that even though they weren’t ‘on the scene’, they were still being creative. Some of these songs sound as though they had been written and arranged a little while back. This isn’t a bad thing. The ‘focus’ is on the group. The music and the arrangements are ‘supposed’ to be in support of the ‘group’. It’s there’.

Some classic artists try to sound ‘contemporary’ with sounds that their fans may not appreciate and the ‘young-uns’ aren’t even going to listen to. Aside from a short ‘rap’ portion in, “Lucky Tonight”, the men have stuck to their ‘vocalist guns’ and the musical standards that their fans will accept, appreciate and maintain the identity they established that made them
popular.

They were best known for their ‘Slow Jams’, but they did a good mix in of up tempo dance tunes. I like the ‘kick’ in “Don’t Need No Rehab” and “Get Down”. Along with those are some more ‘moderate tempos’ that groove along nicely, and at the forefront, Black Ivory harmony.

There is a sort of ‘campy/novelty’ song in “Lookin’ For Love” that talks about a ‘blue dress’ that was in the news some 15+ years ago. Just thought I’d mention it.

If there is a song that might be considered ‘traditional Black Ivory’, it is ‘Back Home’. I tend to ‘look’ for that thread to origins when I listen to classic artists. This tune did it for me. I could of course relate to the story as it is about an artist who was on tour for a while and was eager to get back to his woman. But more than that, it is Black Ivory as we remember them some 40 years ago (damn! Has it been that long?)

“CONTINUUM by BLACK IVORY” is an album that the fans of Black Ivory will find a nice refreshment of a familiar sound. Putting aside the fact that we have become accustom to the ‘canned drum sounds’, and some of these tracks would have been fatter with a ‘live’ drummer, “CONTINUUM” doesn’t go far astray from what we appreciated in BLACK IVORY. Strong lead vocals and lush background vocals sit well out in front, reminding us of what ‘Vocal Groups’ was all about.

Now…I have some ‘runs’ to make and I am putting CONTINUUM back in the car. I still love good vocals! 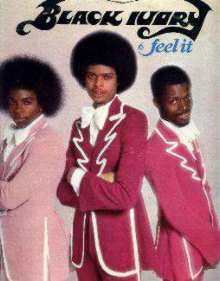