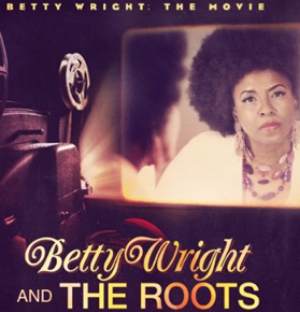 Please allow me to share with all of you another great find that came out recently – the latest from Betty Wright.

We all know the output of Miami-based soul legend Betty Wright, known for such classics as “Clean Up Woman”, “Tonight Is The Night”, “No Pain, No Gain”, and “After The Pain”. She did a song with Angie Stone back in 2006 or 2007 titled “Baby”.

Well, she’s back with a brand new CD titled “Betty Wright: The Movie”. The music is provided by Philly’s own The Roots and, let me tell you, the CD is SLAMMING!!!

Just like Full Force did for James Brown back in 1988 for his album “I’m Real”, The Roots are doing for Betty Wright on her latest CD. Fourteen songs of pure, unadulterated, gut wrenching soul and funk! The CD is solid from start to finish – there is not one single filler cut, on the whole CD. A solid listen from beginning to end.

She is still the storyteller that she has always been with her lyrics and her singing is still as soulful and solid as ever. The Roots understand her style very well and provide solid instrumentation with REAL INSTRUMENTS and REAL SOUL! No hip-hopped soul here. Granted, three of the songs do feature very brief raps in the middle (one from Snoop Dogg). However, even the raps fit in perfectly and are unobtrusive. Again, all involved understand the lady and they allow her to do her thing without getting in the way.

I would already place this as one of the best CDs that I have heard from start to finish in quite some time without any reservations. It is *that* good! 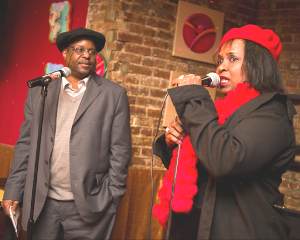 Just wanted to thank our friend Randy Thomas (of Universal), the folks at S-Records and of course the fabulous Betty Wright for allowing me to host her Listening Party/Forum/Live Performance on Wednesday evening at Billie Blacks in NYC the other night. Not only is she one of my favorite artists of all time, but Betty Wright holds an esteemed place in the history of the Soul-Patrol.com website. Soul-Patrol.com’s Betty Wright page (http://www.soul-patrol.com/soul/betty.htm) is one of the first artist pages that I ever did, way back in 1996. It is also the very first webpage that I ever had a publicist (Jason Mitchell) contact me and ask me to make corrections on, because I had misstated several facts. Not only a good lesson learned for me as I was just starting out, but Jason ultimately became a fan of the site and helped me out quite a bit during the early years of Soul-Patrol.com.

So I found myself on the stage at Billy Black’s on my birthday, emceeing the show, leading a Q/A session with the audience and talking trash with 2010 Grammy Award nominated Betty Wright (for the song “GO”), one of my all time favorite artists. Hell, I even have pictures to prove it…..LOL

That is all I am going to say, anything else that I would put down on paper would be far too self serving, because obviously I am not quite able to be an objective writer in this case. And it’s a good thing that you don’t have to depend on me to say anything more about this since our friend Baron Keels was in attendance and he’s going to be able to give you all a much more objective description than I can…. 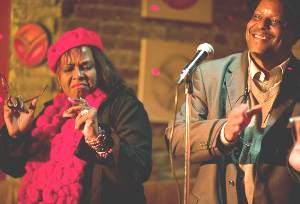 I get to the place. it was another cold night. i get in, i see the listmeister, but I don’t see Betty Wright. He tells me that Ms Wright is only singing one song. I thought to myself, this ain’t gonna be good. There was a lot of women there ready to hear her sing.

A few minutes later, Bob comes up to the stage & says it’s his b-day. but since this was a special day, he was glad to be in the city & he introduced ms wright to the stage. She was sitting all the way in the back, that’s why i didn’t see her : ) she came up, & had the crowd sing happy b-day to Bob Davis. She also mentioned she is here to promote Mary j Blige’s domestic abuse charity. If it was anything else, she would be back in miami enjoying the heat. She played a few songs from her new cd. answered a few questions. I didn’t know she was part of this show called now explosion. The only thing I remember about it is the the theme & psychedelic special effect. She answered mine about her association with the do you want to get funky with me album by peter brown, she was a featured singer (that was her singing the hook on dance with me).

Here’s a little know fact about Betty Wright. She was singing professionally since she was 11. Discovered George & Gwen McCrae, her sister was the background singer on “That’s the way i like it.” She helped mold the TK Records sound of 70s. She now works with acts like Snoop & Joss Stone. These were the song we listened to.

I shouted out for her to play “Girls don’t do what the guys do.” Instead, she played this song called “Hollywood”: an updated version of that g.d.d.w.t.g.d. tonight again is a more to date up of tonight’s the night. Its a nice romance steppin song. Baisden should play this on his show. Then she sang this song called, “GO.” it’s a song on domestic violence. Before she sang it, Ms. Wright said the Grammy people heard & threw it in the ballot for r&b female song of the year. it I wonder if Kiss or Bls will play this? Or if Mary J will leave happy music and come back and sing this? The night wasn’t over, remember i mentioned women were not going to be happy if she going to sing one song? Well, they weren’t: ) .

They were like, i paid $20.00. I want hear another song. she said if folks would contribute to the mjb fund, she would do one. A lady gave her 50 bucks to do “Clean up woman.” She sang it & most of the crowd was happy. It was an interesting night & i was not disapointed. thanks y’all : )

Here is a little backround, in case some of yall may have forgotten…

Wright is working on an album in her hometown of Miami that S-Curve will release later this year, featuring guest appearances by Lil Wayne, Snoop Dogg, Joss Stone and others. She wrote and produced “Go!” in addition to performing it.
S-Curve Founder/CEO Steve Greenberg said “S-Curve is thrilled to have Betty Wright on our roster and honored to be able to release her Grammy-nominated single ‘Go!’ The song contains a powerful message against domestic violence, which is delivered forcefully by the legendary Ms. B. Having worked closely with her in the past on Joss Stone, Tom Jones and Diane Birch, I’m happy we are finally getting to work with Betty on her own album.”

This is not the first collaboration for Wright and Greenberg. In 2005, they were nominated for a Best Pop Album Grammy, along with co-producer Mike Mangini, for their work on Joss Stone’s ‘Mind, Body, and Soul’ LP. The three teamed up again in 2008 to produce two tracks on Tom Jones’ acclaimed album ’24 Hours.’

Betty Wright, a 14-time Grammy nominee as a writer, artist and producer, including a Grammy win for Best R&B Song (“Where Is The Love”), has been an R&B trailblazer for over 40 years. She released her first hit, “Girls Can’t Do What The Guys Do” at the age of fourteen and recorded her million-selling signature song “Clean Up Woman” at age eighteen. She was the first female artist to achieve gold record sales via her own record label, Ms. B Records. She has collaborated with everyone from Stevie Wonder to Alice Cooper, toured with Bob Marley, and has done vocal production for the likes of Gloria Estefan, Jennifer Lopez, and Joss Stone. She served as vocal coach on P Diddy’s MTV series “Making The Band.” She continues to mentor new talent to this day.

So come on out and hang with us….MEET BETTY WRIGHT (live & in color)