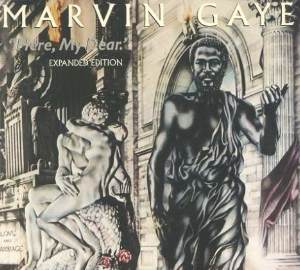 Sometimes, as I go thru my own “detective work” in the arena of Black music, I feel like Ray Milland’s character must have felt at the end of “The Big Clock.”

Today is yet another one of those days.

When it comes to questions about Black music, the at least a part of the answer for me always seems to come back to the tortured genius of Marvin Gaye.

And how fortunate we are at this time in the history of Black music, a critical time it is indeed to be presented with an album of new music from our friend Marvin Gaye. This is a time for Black music to reinvent itself and we have been in the midst of that reinvention for most of this decade. We now have what is fundamentally a new album from Marvin Gaye to use as a reference point to insure that the framework for the construction project being undertaken by today’s artists (especially those who claim Marvin Gaye an influence) is adhered to properly.

“Old headz”, won’t like this album.
There is absolutly zero “nostalgia value” here.
This is an album that isn’t about the past.
It’s about the future…

Today’s male artists always claim a holy trinity of influence: “StevieWonderDonnyHathawayMarvinGaye”.
They recite it almost as if it’s a singular “Web 2.0 phrase”. The reality is that what most of them do is to pick the most boring (& least challenging) aspects of Stevie Wonder & Donny Hathaway, mimic those and call it a day (ex: John Legend). Zzzzzzzzzzzz

There is good reason why artists avoid the essence of Marvin Gaye.

To enter the world of Marvin Gaye, means that you must be willing to create art that might be dangerous to you not only on a musical level, but on a personal level as well. Marvin Gaye was a genius, but he was also “crazy” and he lived on the edge to such an extent that the very same personal issues he spoke of so eloquently in his music are no doubt the same issues that caused his early death. Attempting to create art in a similar mode, might just cause a similar end result? This is an artistic challenge that few “sane” people are willing to undertake.

Tonight I have been listening to Marvin Gaye – Here, My Dear [Extra Tracks] [Original Recording Remastered].

I’m sure that many of you remember the original album. It was the last and least commercially successful album created by Marvin Gaye during his period of creative brilliance of the 1970’s, starting with the “What’s Going On” album. The album was infamous, because it’s probably the only time that an album was used to finance a divorce settlement (thus the title “Here, My Dear”).

Universal Music (via Harry Weinger) has done an excellent job of re-releasing the albums of Marvin Gaye from the 1970’s. They not only have recreated the original albums intact, exactly how we remember them, but these reissues are like no others that you have ever heard before. That’s because they all have as an overt purpose to help us to truly understand the genius & visionary that Marvin Gaye actually was. By including both remixes & previously unreleased tracks, they also help us to understand the complexities & contradictions that made up the totality of Marvin Gaye and how he overlayed those complexities & contradictions directly on the music in a way that gave the listener such insight into his mind.

Never before or since had an artist laid his own soul bare for all who bothered to pay attention to absorb. He is both confident and confused about his own personal & musical reality, at the same time. If there ever was a “divided soul”, it was Marvin Gaye, an artist who simultainiously both created & sabotaged his own greatness. As such his life & career stand clearly as a metaphor for the internal struggle of Black American Males in our society. This is the reason why we relate so well to Marvin Gaye, despite his superstar status, he really does seem like a “regular brotha w/issues.”

For the purposes of this exercise, I will focus on Disc #2 (“the new stuff”):
Here are the song titles

Now if you know the basic Marvin Gaye story, it’s obvious that these songs are autobiographical and deal for the most part with the pain of his relationship with Anna Gaye (Berry Gordy’s sister). But what the song titles don’t tell you is the emotional pain and sadness that Marvin Gaye is pouring into these songs that listening to them does.

The other thing that you can see from these song titles is that these songs have been “touched” by modern day producers. However unlike other efforts of this type, it seems to my ears like these producers realized very clearly that their role was not to implant their own vision into the proceedings (a’ la the Motown Remixed album), but instead to extend the vision of Marvin Gaye into 2008. And for this I applaud them, because in doing so they allow us the ability as listeners to impose that vision & framework directly on the artists of today, who claim Marvin Gaye as an influence

Now here is the twist, all of this pain and sadness is riding on top of some of the smoothest, slow burnin & uptempo jazz-funk grooves (a’ la “You’re the Man”) that you would ever want to hear. In between we hear African drumming & chants that at first sound like they are emanating from the motherland, but then you quickly realize that those sounds of the motherland are coming to us, filtered by Marvin Gaye’s street corner doowop days in Washington DC (with Marvin serving as his own background singers, as usual).

As this is going on there are more twists, for example the guitar solos on the instrumental “Is That Enough”, sound like they are straight off of a mid 70’s George Benson CTI album or are perhaps leftover from the “Trouble Man” soundtrack.

Marvin thrashes, taunts (including describing how he has now found someone else to love) and talks junk to his soon to be ex wife for this entire album. It’s gut wrenching, it’s sad and yet the groove is sooo f-u-n-k-y that I don’t know if I’m supposed to smile or cry.

And as I listen to this album coming towards it’s conclusion, I start to remember that almost all of our current day male “Nu Soul” artists cite “Marvin Gaye” as a key influence. And they are correct, however what those artists haven’t quite nailed yet is how to balance the kind of contradictions and complexities that Marvin Gaye was dealing with as elements of art. You see it’s not just having the complexity within the music & the lyrics, it’s also in how to achieve a perfect kind of balance so that that complexity becomes a balanced and fully formed artistic vision. The good news is that there are some male artists of today (ex; Marlon Saunders, Eric Roberson, Sonnyboy, Nadir, Mike Calzone (Calhoun), Rahssan Patterson, Mark Broussard, Donnie & others) who are attempting to operate in this mode from both a lyrical and musical perspective. It’s going to be exciting to watch & listen as these men attempt to fill in the framework that Marvin Gaye provides for them.

And it’s also going to very clearly separate “the men from the boyz”, moving forward!!!!

And most importantly for the future, it’s “Nu Soul”

It sets a standard for Nu Soul.
It raises the bar.

It’s a GREAT album
And it is essential listening for anyone who cares about the future of Black music!

I suppose that I could make my “detective work” a whole lot easier (just like Ray Milland could have done?), by simply turning to Marvin Gaye for the answer, cuz his name always seems to come up, one way or the other?

But that wouldn’t be as much fun….

Look for these songs playing as as “buzz cuts” on Nu Soul @ RadioIO.com

LET’S GET IT ON: CD DELUXE