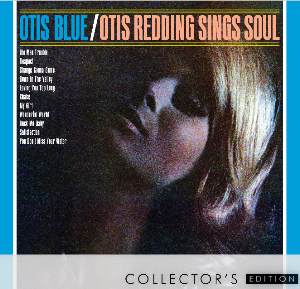 OTIS BLUE: OTIS REDDING SINGS SOUL—-THE COLLECTORS EDITION is an expanded package of Otis Redding’s 3rd Album done back in 1965. It’s a 2 CD set containing the original Mono and the original Stereo mixes. These two versions ALONE would be worth having as a “Collector” of the music timeline of the development of Soul on the American Pop Music scene. HOWEVER…..this package goes NOT “A” step further….NOT 2 steps further…..but….a THIRD and a FOURTH step further!!!!!

We have all gotten used to the “Bonus Tracks” on these re-releases. That’s just that “A” step further. “I’M DEPENDING ON YOU”(“B” side to “I’ve Been Loving You Too Long”) and “ANY OLE WAY”( “B” side to “Satisfaction”) serve as the “Bonus Track” we are accustomed to that weren’t a part of the Original release. What they have done as a “Second” step further is doing a Mono Mix of the Stereo versions of “I’ve Been Loving You To Long”, “Respect” and “Ole Man Trouble”. They have also a 1967 version of “Respect” and a recorded Mono Mix Live version of “Shake”. That’s the Second step. Now the value of these are relative to what your “ears” perceive as “quality”. The good news is they are ALL done very well. If you’re of the persnickety or you are “techno-savvy” and convert these tracks to your mobile vehicle of choice, iPod or MP3 Player, you have choices of Mixes to convert (although converting this entire package to MP3 wouldn’t be a bad thing).

The contents of Original Production are an excellent one…AS IT WAS! This album was the “mark in the sand” for Otis Redding as the unique talent that he was. The original version of “RESPECT”, his version of “SATISFACTION” and the “Crown Jewel” at the time, “I’VE BEEN LOVING YOU TOO LONG” were plenty enough to say, “Hey!!! This is alright!” But intertwined with these cuts were some well selected covers that “The Big ‘O’ ” shines big time. “MY GIRL”, “YOU DON’T MISS YOUR WATER” and tributes to his idol, Sam Cooke, who had passed away the previous year; WONDERFUL WORLD”,”SHAKE” and a serious “headlock” on “A CHANGE GONNA COME”, rounded out a project that, in my NEVER humble opinion, established Otis Redding as the KING of SOUL. James is The Godfather of Soul…….THIS album….in its original forms…..establish Otis as THE KING OF SOUL.

The re release of “OTIS BLUE: OTIS REDDING SINGS SOUL The COLLECTORS
EDITION….”could” have stopped right there and it would have been worth it
all….but NOOOOOOOOO!!!!! They added TWO sections of “The Big O” LIVE!!!

Disc One has him Live at Whiskey A GO-GO. Disc 2 has him Live in EUROPE!!! Now “back in the day”, the quality of Live Albums were not always as “clean” as what they evolved to in later years. Not having heard the “original” live recordings, I can’t say what they “were”. I “CAN” say that THESE live recordings are outstanding! They make you wish you were there. The addition of “these” Tracks makes this re -release more than complete. They demonstrate what separated Otis Redding from the pack that, at the time, was dominated by The British Invasion and the Motown Machine. Later, Otis bumped Elvis in England as the Top Male Vocalist.

There are many reasons why this is a “must have” for your library if you love Soul Music from the historical to the quality of the production. But most of all…..OTIS REDDING: THE KING OF SOUL!
I was never a “big fan” of Otis Redding. I AM NOW!!!!!!

Neither Otis Redding nor any of the members of the Stax house band had any idea that they were about to make soul music history when they entered the recording studio on July 9, 1965. The big-voiced soul singer from Macon, Georgia was on the brink of breaking big when he recorded his third, full-length album in one amazing adrenaline-charged twenty-four hour period. Rhino gives “Respect” to an album most soul music aficionados call one of the greatest of all time with an expanded and remastered Collector’s Edition of OTIS BLUE: OTIS REDDING SINGS SOUL.

The first disc features a remastered version of the original album in mono expanded with previously unreleased alternate mixes of “Respect,””Ole Man Trouble,” and “I’ve Been Loving You Too Long,” as well as remastered tracks from Redding’s explosive live album Live At The Whisky A Go Go. The second disc contains a remastered version of the original album in stereo expanded with a version of “Respect” recorded in 1967, plus five songs recorded live in Europe the same year featuring Redding backed onstage by Booker T. & The MG’s and horn players Wayne Jackson, Joe Arnold, and Andrew Love.

At the time Disc #2 of the set, OTIS BLUE was recorded, the inimitable singer was enjoying the phenomenal success of his highest charting single to date, “I’ve Been Loving You Too Long,” a song he wrote with Chicago R&B great Jerry Butler.The sessions for OTIS BLUE represented a quantum leap for both Redding and the Stax house band of Booker T. & The MG’s, Isaac Hayes, and the Mar-Key horns (the latter at this point consisting of Wayne Jackson, Andrew Love, and Floyd Newman, with Bowlegs Miller guesting on second trumpet). Whereas on many of Redding’s earlier recordings he sounded tentative — feeling his way through a song — on Otis Blue he roars like a locomotive.

The 11-song album features three original tunes, including his then recent hit “I’ve Been Loving You Too Long,” “Ole Man Trouble,” and “Respect.” In addition to his originals, Redding also recorded a trio of Sam Cooke songs as a tribute to the recently slain singer, who had been a seminal influence on him. Rounding out the album is a strutting version of Solomon Burke’s “Down In The Valley” (whom Otis had recently toured with), B.B. King’s “Rock Me Baby,” label mate William Bell’s quintessential southern soul ballad, “You Don’t Miss Your Water” and left field covers of the Temptations’ “My Girl” and The Rolling Stones “Satisfaction.” 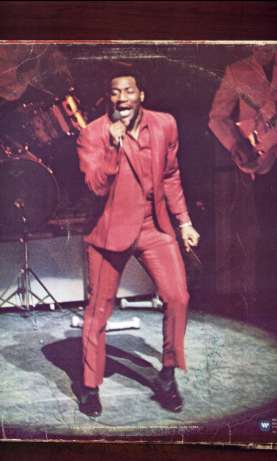 …..anybody want to dance in here?