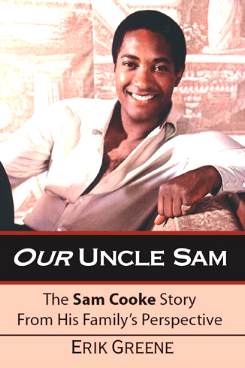 Some of the greatest advancements in modern music are credited to an artist who died over 40 years ago, yet only lived to be 33. Now his dynamic achievements are remembered in his most intimate biography to date, “Our Uncle Sam: The Sam Cooke Story From His Family’s Perspective” (Trafford Publishing, $22.50, www.ourunclesam.com), written by his great-nephew Erik Greene.

After six years as the reigning voice in gospel music, Cooke burst onto the pop scene with the 1957 release of his million-selling single, You Send Me. The song’s innovative blend of Gospel, Pop, and R&B earned him the title of “The Man Who Invented Soul” and stayed on the charts an amazing 26 weeks, rising to #1 in both the Pop and R&B markets. The next single he’d release, I’ll Come Running Back to You, soared to #1 on the R&B charts as well. Cooke would eventually chart an amazing 34 Top 40 R&B hits over his eight year pop career, with most like You Send Me and I’ll Come Running Back to You written by Sam himself. Cooke also wrote and recorded such classics as Chain Gang, Only Sixteen, Cupid, Wonderful World, Having a Party and A Change is Gonna Come, and was among the original inductees into the Rock and Roll Hall of Fame.

In addition to being an accomplished singer, songwriter and producer, Sam Cooke is remembered as the first artist to take a political stand and refuse to sing to segregated audiences. He also recognized the politics of the music industry early in life. At a time when record labels often left even the most talented and successful artist broke and penniless, Sam Cooke was one of the first artists, black or white, to buck the system and demand ownership of his career. He signed an unprecedented deal with RCA in 1960 after coming to the agreement they let him retain control of the copyrights to his music. Sam Cooke was one of the first artists to capitalize on the crossover appeal of popular music by intentionally recording songs that targeted both the black and white markets. He was the first African-American artist to own a record label, and he established his own management company and music publishing company as well. Even more remarkable, he did all of these things before his 34th birthday.

In “Our Uncle Sam”, Greene not only emphasizes Sam Cooke’s accomplishments in music history, but gives the reader an inside look on the childhood influences that drove him to excel. Sam adopted his winning attitude from his strict but loving father, the late Rev. Charles Cook, Sr., who taught his children to never give less than their best effort and stressed the importance of family unity. “My mother and father were both family oriented, and they instilled in us ‘all for one and one for all’,” Sam’s youngest sister Agnes remembers. “We were a very tight, close-knit family. If you had a problem with one of us, you had a problem with all of us.” The Sam Cooke saga is a remarkable one, and is best retold by his closest family members. “Our Uncle Sam” not only contains the intimate memories of his brothers, sister, nieces, nephews, children and stepson, it includes many never-before-seen photographs of the artist and his family

“I have read Erik’s book,” long-time Sam Cooke fan Don Piper admits, “and I truly acknowledge him for his commitment to the project and the effort he took in putting it together. I am grateful to him for taking the time to share the stories and points of view of family members whose voices would otherwise be unheard.”

It’s a First Class book,” North Carolina’s Lawrence Calvin comments. “It’s a #1 seller! (I’m) positively proud of you, and Sam without question is proud of you!”

For over 40 years music fans around the world have waited over to hear the inside story. Now, their wait is over.

Erik Greene is the grandson of Sam’s oldest sister, Mary. “Our Uncle Sam: The Sam Cooke Story From His Family’s Perspective” can be ordered through www.ourunclesam.com or by calling (888) 232-4444 toll-free in the USA and Canada. Readers from the UK can use the ourunclesam.com website or ring 44 (0) 1865 722 113. Shipping is available worldwide. 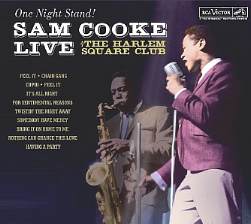 LISTEN TO: Soul-Patrol Presents: Sam Cooke Live at the Harlem Square Club, 1963: Soul Twist/Introduction, Feel It, Chain Gang, Cupid, It’s All Right/For Sentimental Reasons, Twistin The Night Away, Somebody Have Mercy, Bring It On Home To Me, Nothing Can Change This, Having A Party

This album is an absolutely essential CD for ALL Soul music fans to own!

It’s the rich tapestry of the music, sound and persona of Mr. Sam Cooke, perhaps as you have never heard him before, if your only exposure to his music was his lengthy list of pop music hit recordings. Listening to this album will completely change your view of Sam Cooke forever. That’s what happened to me the first time I heard it, back in the 1980’s.

One of the very first CD’s that I ever purchased, back in the mid 1980’s when it came out was “Live at the Harlem Square”. That CD had a profound influence on me! Growing up during the early and mid 1960’s the music of Sam Cooke had always been around me. My grandmother had been a big fan of Sam Cooke’s ever since his Gospel days and his music (both Gospel and Secular) was always being played in her house whenever I was there. However upon hearing the CD “”Live at the Harlem Square” in the 1980’s, my impression of Sam Cooke was changed forever.

Michael Jackson is sometimes referred to as the “King Of Crossover”, for his accomplishments during the 1980’s. Without taking away from what MJ accomplished, I dare say that Sam Cooke had accomplished the very same feat, over twenty years before Michael Jackson did so.

One of the things that face all Black Americans are the issues surrounding the challenge of existing/prospering in an integrated society. For better or for worse, how we face these challenges on an individual level tend to define us. The way that most Black Americans face this is to quite literally develop multiple sets of personalities. In effect we tend to “act one way around other Blacks” and we tend to “act a different way around Whites”. Doing so isn’t really a matter of choice, it’s really a matter of survival and keeping the two things in balance is not an easy thing to do. For Black Americans, one of the worst things that they could possibly be accused of is going too far over to the other side (“Uncle Tom”). On the other hand, a refusal to “assimilate” will be frowned upon by the larger society and most likely lead to economic disaster and worse (jail, police brutality, death). America demands that Black Americans in effect have multiple personalities in order to survive and that is a heavy burden for both Black & White Americans to carry.

– If you listen to the album “Live at the Harlem Square”, what you get is a hard core “chitlin circuit” style performance that seems totally out of place for 1963. It’s literally the merging of the “sacred” with the “secular”. The songs are familiar, yet they are done with a power/groove that suggests and predicts the future style of someone like Al Green in the 1970’s, more commonly known as “Southern Soul”. In effect you get Sam Cooke “acting one way around Blacks”.

– If you listen to the album “Sam Cooke at the Copa”, what you get is the sound of a major pop music superstar giving a fantastic live performance of his familiar material in a mainstream setting. In effect you get Sam Cooke “acting a different way around Whites”.

In my mind, these two albums serve in a way as bookends and as a perfect metaphor for the very same “assimilation challenge” that Black folks faced in 1963 and continue to face in 2005.

Sam Cooke was certainly faced with those challenges as an artist who wanted to be true to his roots, yet also wanted to be heard by as many people as possible. He was successful in accomplishing both, but it must have been a heavy burden to carry…

SOUL-PATROL.NET RADIO – LISTEN TO: SAM COOKE LIVE AT THE HARLEM SQUARE CLUB, 1963 (Soul-Patrol’s Best CD release of 1999): Soul Twist/Introduction, Feel It, Chain Gang, Cupid, It’s All Right/For Sentimental Reasons, Twistin The Night Away, Somebody Have Mercy, Bring It On Home To Me, Nothing Can Change This, Having A Party