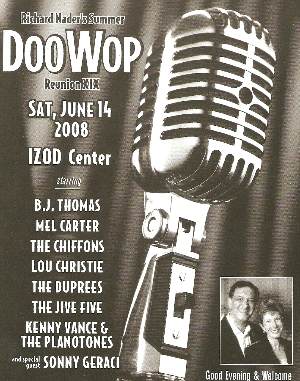 Dealing with the world that we live in today has become an exceedingly complex. That’s because not only do all of our problems seem to be more and more difficult to solve, they are also increasingly inter-connected with each other.

One of the reasons we enjoy attending “oldies shows”, isn’t just for the music. It’s also because they transport us back in time, even if only for a few hours to a time in our lives when every problem didn’t seem to be insurmountable and could actually be fixed (often within the constraints of a 30 minute sitcom.)

Earlier this summer I had a chance to suspend my own reality for a couple of hours at a great “oldies show” here in New Jersey at the Meadowlands Arena, the very same basketball arena where the New Jersey Nets play.

This was a fantastic show; however, it’s not really a “doo wop show”, despite the presence of Eugene Pitt & the Jive Five, Kenny Vance & the Planetones and Soul-Patrol’s own Nu Millennium. If you look at the lineup it’s really a 60’s/70’s “Top 40” (remember that term???) show. I was cool with that, because although I was familiar with all of the hit songs by these artists I had only seen two of them perform live before. So I knew that I was going to be in for a treat, it was going to be like having my old am radio performing live right in front of me.

Here are the performers (and the songs that I can remember)

–Nu Millennium
–Twin Gold (Star Spangled Banner)
–Eugene Pitt & the Jive Five (My True Story, What Time Is It, I’m a Happy Man)
–Sonny Geraci (Time Won’t Let Me, Precious & Few, Rock n’ Roll Heaven)
–Chiffons (One Fine Day, Sweet Talking Guy, He’s So Fine)
–Mel Carter (Hold me, Thrill Me Kiss Me)
–Duprees (My Own True Love, You Belong To me)
–Lou Christie (Love Is a Many Splendored Thing, Rhapsody In The Rain, Lightning Strikes)
–Kenny Vance & the Planetones (Come on and Go With Me, Angel Baby, Cara mia, Looking For an Echo)
–BJ Thomas (Hooked on a Feeling, I Just Can’t Help Believing, Rain Drops Keep Falling on My Head)

Those of you out there who lived thru the era of “AM Top 40 Radio” will easily be able to understand my excitement, but for those of you who never experienced it, a quick history lesson is in order.

AM Top 40 Radio was probably the greatest radio format of all time. It took the very best songs from pop, rock, r&b, country, middle of the road, jazz, etc. and played them all on the same radio station, in between motormouth jocks, commercials & news. In other words you could hear Frank Sinatra, followed by Led Zepplin, followed by Marvin Gaye, followed by Bob Dylan, followed by Otis Redding, followed by Johnny Cash, followed by the Beatles, followed by the Temptations, followed by the Doors, followed by Louis Armstrong, followed by the Jackson Five, etc. If that sounds bizarre to you, trust me it wasn’t, it worked. In the city where I grew up, there were two stations that had this format (WMCA & WABC) and these two stations were the most popular in the city across all demographics. If you remember these stations, they were probably the most popular ones in your city as well. You could hear them playing everywhere. Today you can get a taste of what AM Top 40 Radio was like by listening to “oldies stations” like WCBS-FM in NYC, WOGL-FM in Philly, but it’s really only a “taste”, because these modern day approximations really don’t have the kind of “wide playlists” that the original AM Top 40 Radio stations did, and I suppose that there are reasons why they can’t.

In retrospect, these AM Top 40 Radio could have ONLY really existed during the 1960’s & the first part of the 1970’s, because the type of wide ranging playlists they had were truly a product of their time, a time that we as Americans don’t really give ourselves enough credit for. Many times when we look back at that period, we remember the strife of the Vietnam War, the Civil Rights Movement and more. One of the by products of all of that strife was that very quietly in almost a sub conscious manner, the very objectives of the folks who were protesting in the streets, was being implemented on AM radio stations around the country. These stations existed during a period of time when younger Americans were earnestly trying to bring the country together.

These artists went thru a 3 hour show, performing hit after hit to perfection (it sounded just like the radio…..loll). I knew every song, I knew every lyric, I knew every turn the band would make. The crowd went nuts and every single person who walked out of the New Jersey Nets basketball arena at the end of that show, did so with a huge smile on their face.

I thought to myself, “this is the way it’s supposed to be”, and smiled… 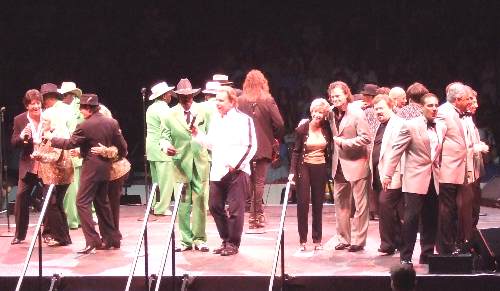 And then I thought about why it wasn’t like this anymore. Today there are separate radio station for every imaginable genre, sub genre and trend. I guess that part is easy to understand. It’s all about “divide and conquer”, as a methodology to maximize profits for record labels & radio networks. While that may be good for the big corporations, the kind of “cultural segregation” that results from it has not been a good thing for the United States.

“The Residual Power of AM Top 40 Radio”

This concert took place on June 14, 2008 and today is August 31, 2008. I have delayed writing this review because I didn’t want what I observed and felt that evening to get “lost in the sauce.” Besides seeing 3 hours of great live performances, I had also been witness to the “residual power of AM Top 40 Radio.” That music had the power to bring people together during a period of American history when the people at the fringes didn’t want it, but the “young kids” tried it anyhow and they did it with their music.

Today we are at a point when most of those “young kids” are now in their 40’s, 50’s & 60’s and they have the power to do the right thing. And doing the “right thing”, might just be a way to get us out of the current “mess” that we find ourselves in. And if you think that this is the part of the story where I say “AM Top 40 Radio” is gonna make a comeback, that isn’t where I’m going (although clearly 1960’s R&B music is today the most popular music in the world, thanks to Amy Winehouse)

As I am writing this review, the TV news is warning of yet another killer storm getting ready to bash the Louisiana coast. A few hours ago an amazing thing happened. The Republican nominee announced that the Republican Convention would have to take a back seat to helping the people who were going to become victims of the storm. This is on top of the amazing scene last week at the Democratic convention, where the Democrats seemed like they re-committed themselves to implementing the objectives of the 1960’s & 1970’s in a real sense. Whoever wins the election; there will for the very first time either Black men or a white woman in the very same halls of power that less than 100 years ago wouldn’t have let either vote in an election. As we sit here in 2008, clearly our society has reached a crossroads and decided that it now wants to “do the right thing.”

It would seem that 40 years after the heyday of AM Top 40 radio the United States has made a conscious descion to finally implement the objectives of those young protesters of the 1960’s & 1970’s. Perhaps the enormity/complexity of our current set of problems, has finally made us come to understand that just like AM Top 40 radio that our strength as a country is truly born out of our diversity? And once we understand that statement to be true, then we are FORCED TO WORK TOGETHER in order to solve the complex set of issues that lay before us.

I dunno about yall, but I am excited and inspired by all of this. How about you???

NP: “The Best is Yet To Come”
–Frank Sinatra

Attending the “Doo-Wop Under the Street Lamp” exhibit in Suitland, MD